A magical location on the Basque Coast

The Flysch Txakolina is very good. It leaves an exciting impression: lively, appetizing and very enjoyable.  We like the low 11,5% alcohol. And that gorgeous length. It just never disappears. And we who just have this one single bottle…

In the area for DO Getariako Txakolina, 95% of the vineyards consist of the grape Hondarribi zuri.  This is an area with great humidity and the vines are traditionally trained high, usual is about two meters above the soil as pergolas, which makes it easy for the wind to blow into the vines and dry the grapes. 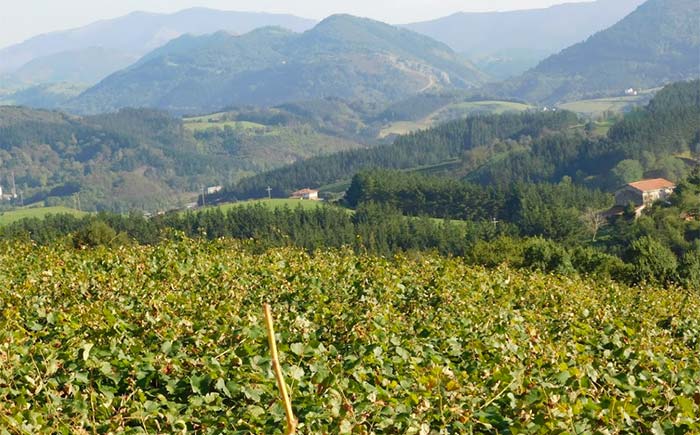 The bodega, named Gorosti, is located in Elorriaga, right next to the coast line, between the small cities Itziar-Deba and Zumaia. Most people would probably just shake their heads hearing all these names, but if we say between Bilbao and San Sebastian it is easier to locate.

The Basque Coast Geopark extends 13 kms. along the coast. It was inaugurated in 2010 and is a part of an European network of geologically interesting locations. Geologists and tourists come to the Basque Coast to study and experience the unique rock formations, known as flysch. These were formed under the sea 60 million years ago and are fascinating to look at with their layers upon layers of rock. The inner part of the geopark offers interesting formations of limestone, called karst.